"Lesley Poling-Kempes has given us a story full of joy, sadness, love, and beauty – and most of all, full of truth. Canyon of Remembering deserves a place among American classics." -- Tony Hillerman

People around the village of Mi Ojo, New Mexico still spoke of the miracle of the flying sheep, even if they did not believe it to be true. They still spoke of the young Garcia girl and how she saw five sheep tumbling in the wind ahead of a thunderstorm, wool balls at the infinite mercy of God’s hand. Now, at forty-seven, the beautiful widow Dominga Garcia de Jesus hasn’t stopped believing in miracles; she’s just desperately in need of one.

Hoping to find his creative spirit and sense of self again, nationally acclaimed artist Whitney Slope flees the high-life in Santa Fe for northern New Mexico’s isolated canyon country. Slope lands in Mi Ojo, and what he finds -- and the miracles and people that find him -- changes his art and alters his life forever.

"Canyon of Remembering is a magical story of the search for fulfillment and the healing power of love. Lesley Poling-Kempes has given us a vibrant New Mexico landscape filled with achingly passionate characters who are destined to remain etched in our memories." -- Michael McGarrity

“Canyon captures in words the essence of the people of northern New Mexico just as Georgia O’Keeffe did in her landscapes of the Abiquiu area. Read it now.” -- Max Evans

Dominga de Jesus stood alone and wide awake on the edge of the mountain canyon. The faraway bottom of the cool canyon was still held in predawn darkness. Dominga’s brothers, Porfirio and Virgil, and her youngest nephew, Tim, were asleep in the down bags fifty yards behind her in the clearing. Only the four hobbled horses watched Dominga in the half light. Dominga peered through the ponderosa tree trunks at the horses she knew were wondering if she were about to saddle one of them up, and head him nose first into that cold canyon.

In the old days, Dominga de Jesus – Garcia back then – would be halfway down by now, easily reaching the sandy arroyo at the bottom where she would explore the dry river and then scramble back up to camp before any of the boys knew she had left. Dominga wanted to do just that, right now – down and up in time to make the breakfast fire, and a pot of cowboy coffee, before her brothers and nephew stirred.

Dominga pulled her wool hat down over her ears and zipped up her parka. It was early June, time to push the cattle to high mountain pastures, but in New Mexico in the thick of a ponderosa pine forest at first light, the air felt like late November.

Doming looked back at the men rolled in their bags, and at the horses now feigning sleep and disinterest in the far clearing. She had not climbed down such a rock slope since childhood. Since marriage to Feodoro, which was really childhood, or the end of it, at eighteen years of age. She had not used her feet to scramble over sandstone or shale, through pinion or juniper, or around the cactus growing in-between, since before children, before grandchildren, before the confronting and acquiring of adult pain about which young Hispanic girls are not forewarned.

Here on the edge of this canyon, she was feeling she could climb like Dominga Garcia again. Not to leave the children and the life of the last thirty years behind, but to find some piece of herself that felt this morning as if it lay somewhere down in that canyon. Like a flung shoe; a mistaken toss made years ago, and she was wanting the pair together again.

“Nonsense,” Dominga whispered to the sky, “I just want to climb!”

Available now as an eBook! 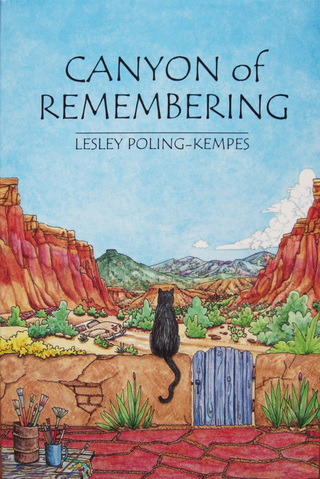