When Georgia O’Keeffe first visited New Mexico in 1917, she was instantly drawn to the stark beauty of its unusual architectural and landscape forms. In 1929, she began spending part of almost every year painting there, first in Taos, and subsequently in and around Alcalde, Abiquiu, and Ghost Ranch, with occasional excursions to remote sites she found particularly compelling. Georgia O’Keeffe & New Mexico is the first book to analyze the artist’s famous depictions of these Southwestern landscapes.

Lesley Poling-Kempes furnishes a fascinating chronicle of O’Keeffe’s years in the region as well as a useful explanation of the geological forces that produced the intense colors and dramatic shapes of the landscapes O’Keeffe painted.

"The illustrations are beautifully reproduced, and the book's three essays are intelligent, carefully researched, and elegantly presented." – Roxana Robinson, The Wilson Quarterly

"In her meticulous account, Lesley Poling-Kempes discusses the geophysical origins of this land of 'extremes and contrast,' analyzing the layered stone formations and matching them up with O'Keeffe's keen observations of red shales, sandshales and silt stones created 200 million years ago. . ." – Dore Ashton, Times Literary Supplement 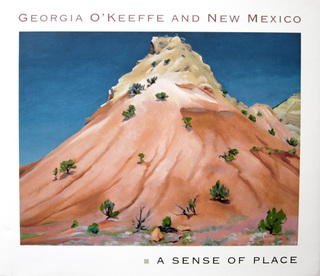