The Harvey Girls: Women Who Opened the West

“A clear and full history and analysis of the contribution of the Harvey Girls in the development of the Southwest…the book is a major achievement.” -- Ray B. Browne, Journal of American Culture

“A story that seems to have completely vanished from the national memory; for giving it new life, Poling-Kempes deserves gratitude and praise.” -- Jonathan Yardley, Washington Post Book World

“Although Poling-Kempes' subtitle might mislead you into thinking they were an all-female wagon train or a roving band of women outlaws a la the James Gang, the Harvey Girls actually were ''only waitresses,'' as one denigrator put it to the author. But they were waitresses in a unique sisterhood, the approximately one hundred thousand women, mostly from the East and Midwest, who came to the American West between 1883 and the 1950's to work in the Harvey hotel and restaurant chain established by Fred Harvey along the Atchison, Topeka and Santa Fe Railway… an interesting, sometimes even amusing bit of Americana.” -- Susan Rice, New York Times Book Review

The Harvey Girls is the story of the pioneering women who worked as waitresses at Fred Harvey’s restaurants along the Atchison, Topeka & Santa Fe Railway from the 1880s through the 1950s. At a time when there were "no ladies west of Dodge City and no women west of Albuquerque," these 100,000 young women, between the ages of eighteen and thirty, left comfortable homes in the East and Midwest to work in what was then the Wild West. They came as waitresses, but when their contracts were up many stayed and settled, building new lives in the struggling cattle and mining communities. They, along with other Harvey employees and railroad men, became the founding mothers and fathers of the new West.

Who were the Harvey Girls and what did they think of their lives and work in America’s Southwest? Lesley Poling-Kempes recreates their experience with 76 interviews, archival research, and vintage photographs, many from private collections and never before published. The stories are personal, but laced with the greater history they were part of: The Dust Bowl, the Depression, the troop trains of World War Two, and anecdotes about some of the famous people who ate at Harvey Houses -- Teddy Roosevelt, Bob Hope, Charles Lindbergh, Will Rogers, Shirley Temple, and Robert Oppenheimer.

The Harvey Girls: Women Who Opened the West, first released in 1989, has since been reprinted more than a dozen times, and is now published in trade paperback by Da Capo Press, Cambridge. The book is considered the definitive work about the Harvey Girls and the Santa Fe Railway, and is quoted and referenced extensively in both academic and trade publications.

“In a conversation with a newspaperman about the Harvey Girls, it was brought to my attention that ‘they were, after all, only waitresses.’ I wanted to dispute his insinuation that they were unworthy of closer study, but at the time was not certain why. They were only waitresses. They served a four-course meal in under thirty minutes – perhaps an impressive feat among restaurateurs, but not really worthy of historical recognition. They were not paid so well as to be considered better off than other people in their communities. As a group, they did little or nothing actively to advance women’s rights. They weren’t highly educated, and there are no towns or buildings or roads named for them in a region where virtually every mountain, path, and community is named in honor of some early citizen.

“If there is a moral to the history of the westward movement it is this: the transcendent importance of small things and of unimportant people.” (E.D. Branch) The Harvey Girls were a group of unimportant people – women who came west to work, to marry, who became absorbed in the vast lands of the Southwest. The new social history focuses on the affairs of ordinary people, and seeks to unearth the lives and details of those whose names are not known, but whose contributions are worthy of attention. In examining their lives, we examine the origins of our own.”   From the Introduction 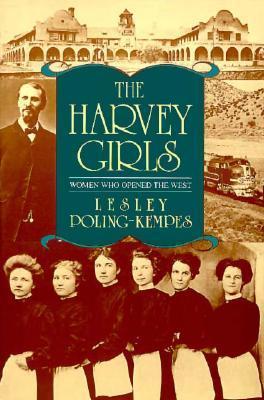 Click here to order this book.
Atalaya Productions and All3Media

The series will follow young women who worked in Harvey Houses in the early years of the 20th century and will be written by Liz Lake, who has written for Call the Midwife and Riviera. The series will be based on the book by Lesley Poling-Kempes entitled The Harvey Girls: Women who opened the West.