Valley of Shining Stone: The Story of Abiquiu

“A writer’s acute, compelling history of one of America’s more endangered landscapes. Digging deeply into the history of a place, Poling-Kempes mines a rich vein of lore and myth.”
Kirkus Reviews

The region of Abiquiu and the Piedra Lumbre (Shining Stone) has been a pivotal and prominent locale for human stories since the time before recorded time, its soil the home for the famous and infamous in very nearly every era in Southwestern history. American painter Georgia O’Keeffe is the much-heralded headliner of the valley’s notable citizens list. But she is, in fact and in legend, a latecomer whose story is the icing on an already rich and multilayered cake of characters who in their own time exerted considerable and remarkable influence on the story of the Southwest.
“Historians have loved Abiquiu and the Piedra Lumbre basin from afar. The valley’s story has been told in fits and starts, usually as an antecedent to or anecdote in someone else’s story: the region figures prominently in the histories of the pre-Pueblo and Pueblo cultures, and in the arrival of the Spanish and their struggles to establish New World colonial settlements. Individuals involved with the Southwestern Indian slave trade, the Rocky Mountain fur trade, and the first overland trade caravans between New Mexico and California began their perilous journeys from Abiquiu’s dusty plaza. And decades of Navajo, Ute, and Apache conflicts with the Spanish, Mexican, and United States governments simmered and too often boiled into bloody warfare on the Piedra Lumbre’s vast llanos.

“Abiquiu is a cosmic village. Its story has always been about many kinds of people and cultures. Everyone who lives here was once an immigrant. Abiquiu is a private place, but its story belongs to the world.” – Charles M. Carrillo

From the University of Arizona Press 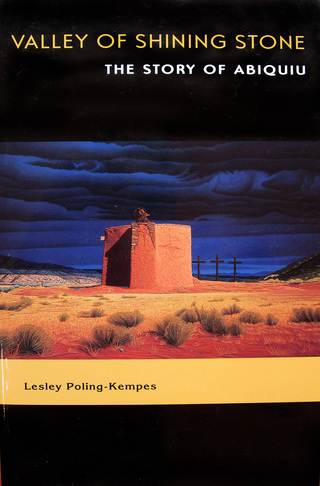